Just added to your cart

The best thing that happened': Lost dog reunites with family after two months

The fire was coming. It was almost midnight on Aug. 18, 2020, when David Meade received the order to evacuate from his home in downtown Boulder Creek, threatened by the fast-moving CZU August Lightning Complex fires, which blazed across San Mateo and Santa Cruz counties and were now torching Big Basin Redwoods State Park. Meade threw a few things into a laundry hamper, made a few stops at the homes of nearby friends and family members, and finally set off with his wife Hannah Unti-Meade, the couples’ five-year-old son Finn and their six-year-old pit bull-mastiff mix, Chloe.

As the flames neared, the family made a decision to leave Northern California for the time being. They would go to Los Angeles, where Meade is from, and stay with family. They had no idea they would be gone for nearly four weeks.

The plan was to hide out with Meade’s family in LA, which in the time of COVID-19 felt comforting. “I hadn’t seen my parents since last Thanksgiving,” he says.

The trip was going well for about a week and a half, until one night when the family went to a cousin’s birthday party. They left Chloe behind in the fenced yard.

Fireworks were going off in the city that night, Meade says, and they must have spooked Chloe.  The 75-pound dog hopped onto a stone path in the yard and followed it up to the carport rooftop, then jumped into a neighbor’s unfenced yard and bolted. 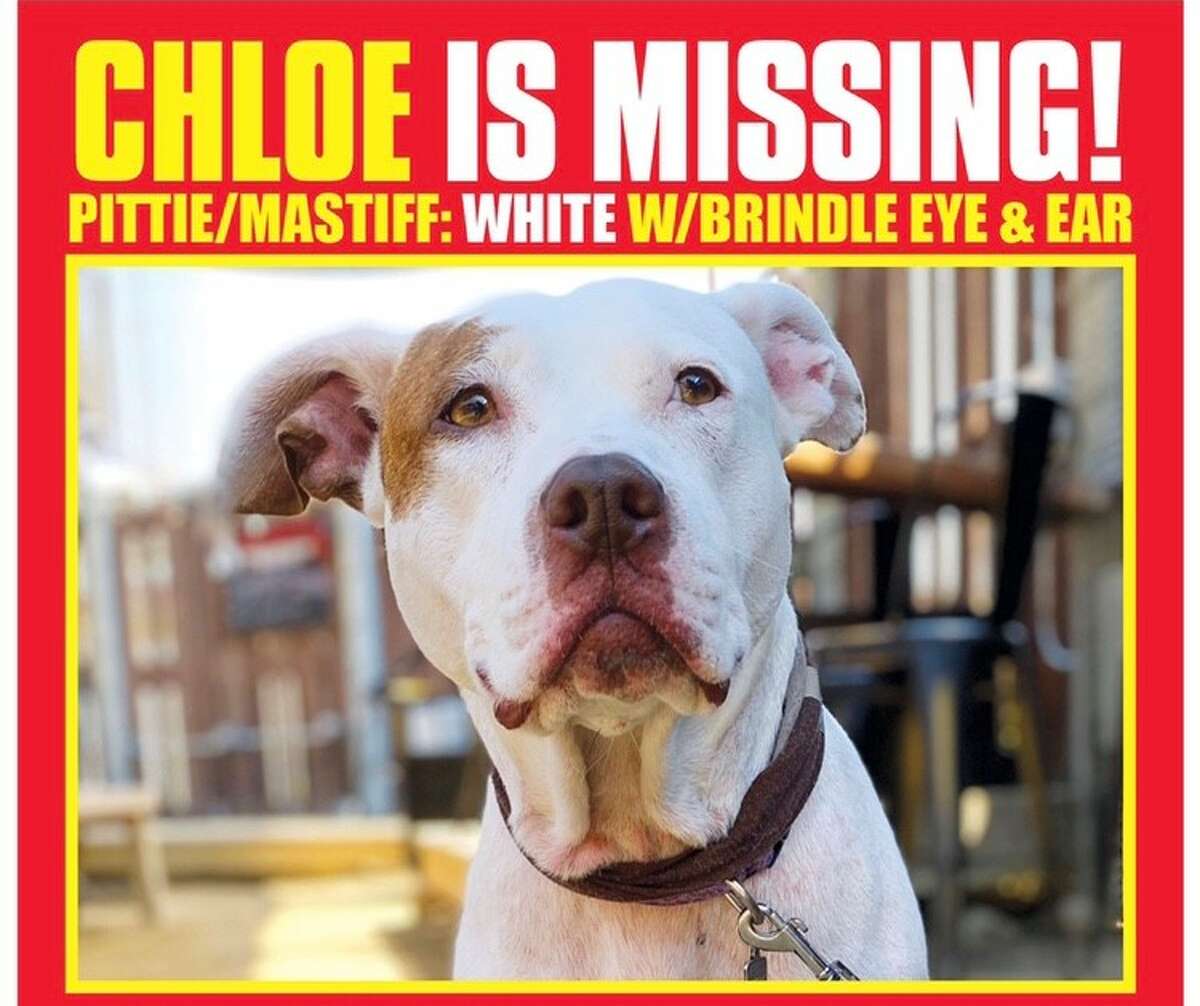 David Meade handed flyers out around Los Angeles in the effort to locate Chloe.

“I think because we weren’t there, she just freaked out,” Meade says. “She doesn't wander and has never run away before. We usually keep our gate open.”

Meade’s father was at home that night. When he realized Chloe was gone, he immediately called his son and then drove around for about two hours trying to locate the dog. The search was unsuccessful. Chloe had simply vanished.

Meade decided he would do everything in his power to find the dog. Meanwhile, he needed to stay strong for his wife, and especially for Finn, who “doesn’t know a life without Chloe,” he says. But Meade was torn up about the disappearance of the dog he had brought home when she was just six weeks old.

With her white coat and brindle eye and ear, Chloe had been part of the family from the beginning. Meade is a butcher at Johnnie’s Super Market in Boulder Creek, and Unti-Meade was working there as a cashier back in 2014. Then in their early 20s, the couple got together and moved in with Unti-Meade’s father, then picked a puppy from a friend’s litter together. The choice was easy.

“Chloe’s super sweet, super loving,” Meade says “She’ll run right up to you. She loves to play catch. That’s what she does with my son.”

Finn entered the family shortly after Chloe did, and the two of them were inseparable, even taking naps together. The hardest part about losing the dog for Meade was knowing that his son was old enough to understand what happened. 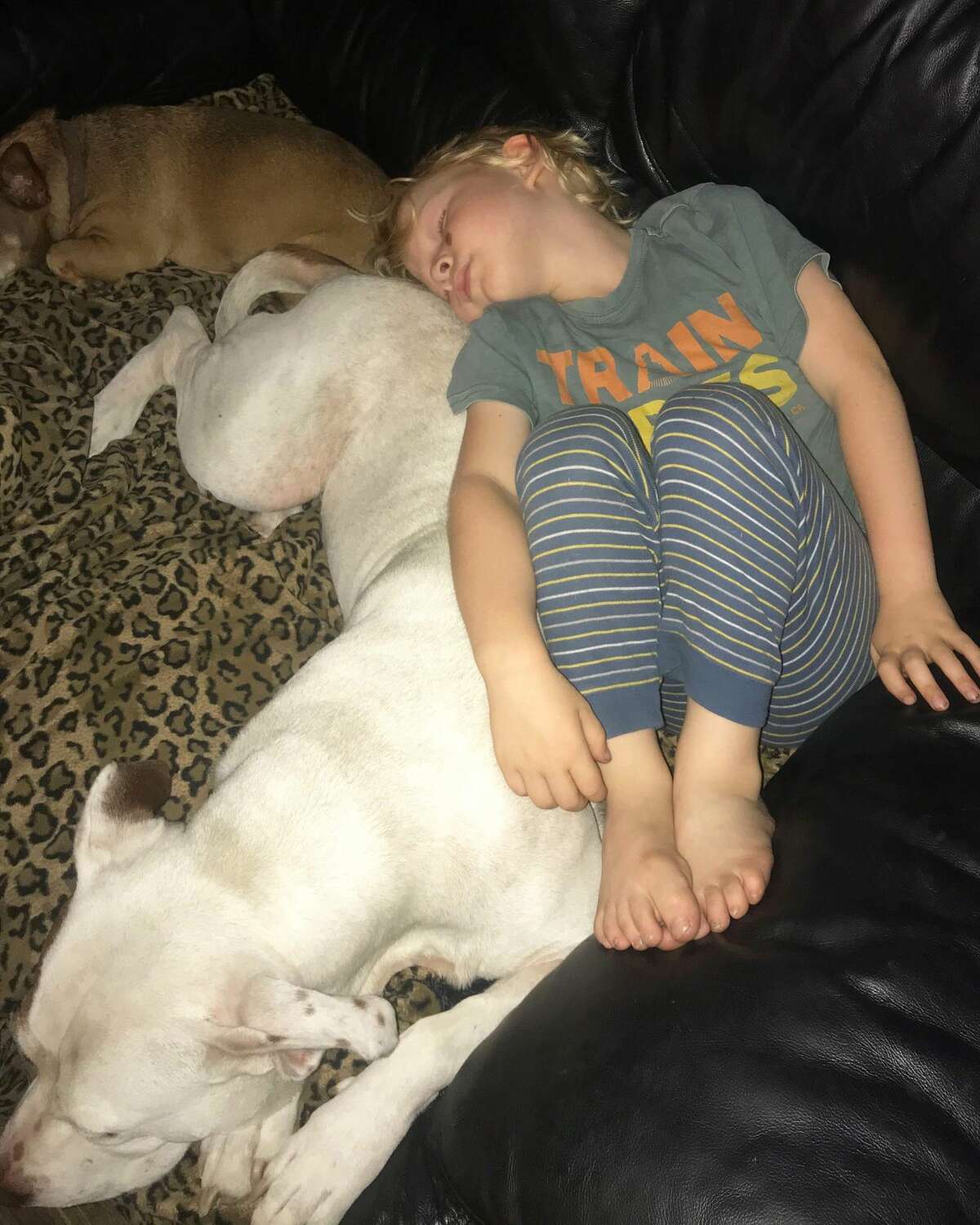 Finn entered the family shortly after Chloe did, and the two of them were inseparable, even taking naps together.

In the days that followed Chloe’s disappearance, Meade reported her lost to the company that implanted her microchip. It didn't have a tracking feature, but if it was scanned at a vet’s office or an animal shelter, the chip would reveal her status as a lost pet. He posted on social media networks and apps including Craigslist, PawBoost, Lost My Doggie, Shadow and Nextdoor. He called all the shelters. He made flyers and handed them out around the neighborhood.

One tip came in from Craigslist, from a person who claimed to have spotted the dog on the night of her disappearance. But the case went cold after that, and four days after Chloe ran away, Santa Cruz County started allowing residents to return to Boulder Creek.

“I was doing whatever I could to find her,” Meade says. “Unfortunately we had to come back up here and start working.”

Back in fire-ravaged Boulder Creek, Meade found his home standing, but was devastated to learn that friends were not so lucky. The fire had leveled thousands of buildings in San Mateo and Santa Cruz counties, including historic buildings in Big Basin. Meade went back to work at Johnnie’s but continued texting with people in LA and refreshing his social media posts. No leads emerged.

Chloe’s sixth birthday passed in her absence, and Finn began having dreams about her. Some of the dreams were good ones, the boy told his father. “He said, ‘I saw Chloe and she gave me a hug,’” Meade says. But in another one of the boy’s dreams, Chloe died. 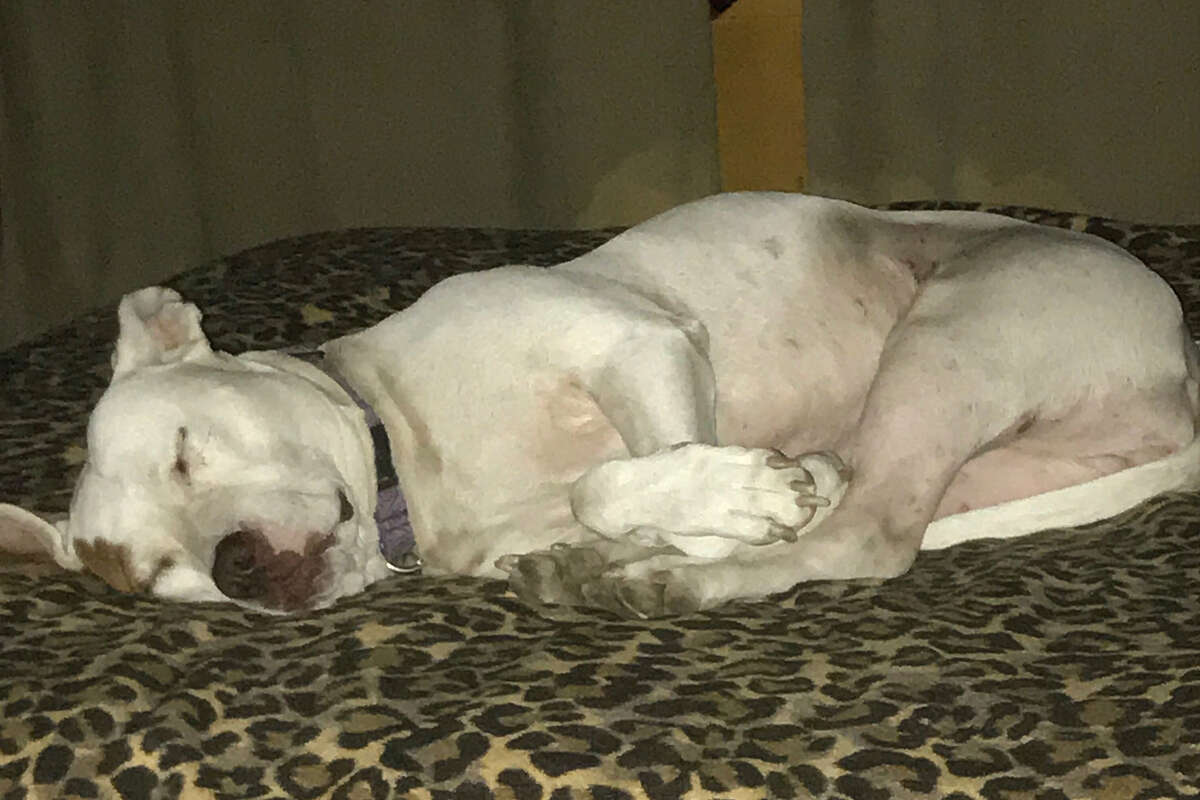 Meade knew that if Chloe had gotten hit by a car or something bad had happened, someone would have scanned her microchip and contacted the family. He still had hope, but frankly, he suspected that someone had found and kept the dog.

“In the LA area, pit bulls are a really big thing,” he says. “She’s so sweet and loving, so I thought that could be it, too.”

Meade believed that one day a call would come, particularly if Chloe had a new family that tried taking her to the vet. Instead it was a text that came last Wednesday — nearly two months after Chloe was lost — from a couple standing with a dog in Ernest E. Debs Regional Park. The park is about 3 miles from where Chloe got out, Meade says.

In the text message, the couple wrote that the dog had run up to them wearing a purple collar with a tag that reads, “My name is Chloe,” and they were reaching out to the numbers listed on the tag.

Meade and his wife could hardly believe it and asked for a photo. Sure enough, it was their dog. And actually, she looked great. 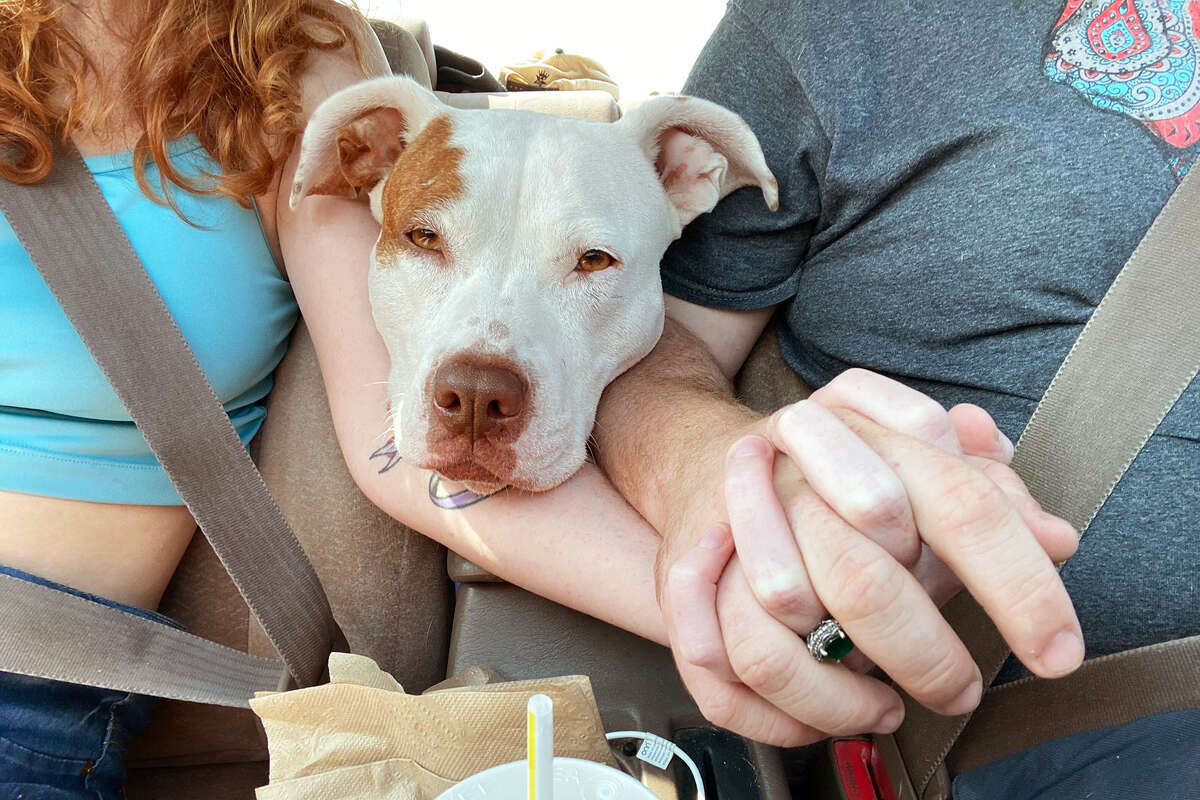 “Someone was taking care of her,” Meade says. “She looked healthy, nice and clean.”

Meade couldn't help but think about how the Lakers had been winning and the Dodgers were going to the World Series, which probably meant more fireworks in LA. Maybe Chloe had found a way to escape again. Whatever had happened, he was grateful she was safe and would soon be coming home.

The next day, Meade and Finn jumped in the car for another road trip to LA. Meade’s mother picked up Chloe and she was waiting at her house when the owners arrived.

“Aww, my Chloe,” Finn said, running toward her, and he gave her a big hug and a kiss. She started jumping and barking, then licked Finn’s face.

It had been an absolutely crazy couple of months. The pandemic. The frantic evacuation as the flames neared. The long journey to safety in Los Angeles. And then losing Chloe. But then had come the kindness of the couple who found her. 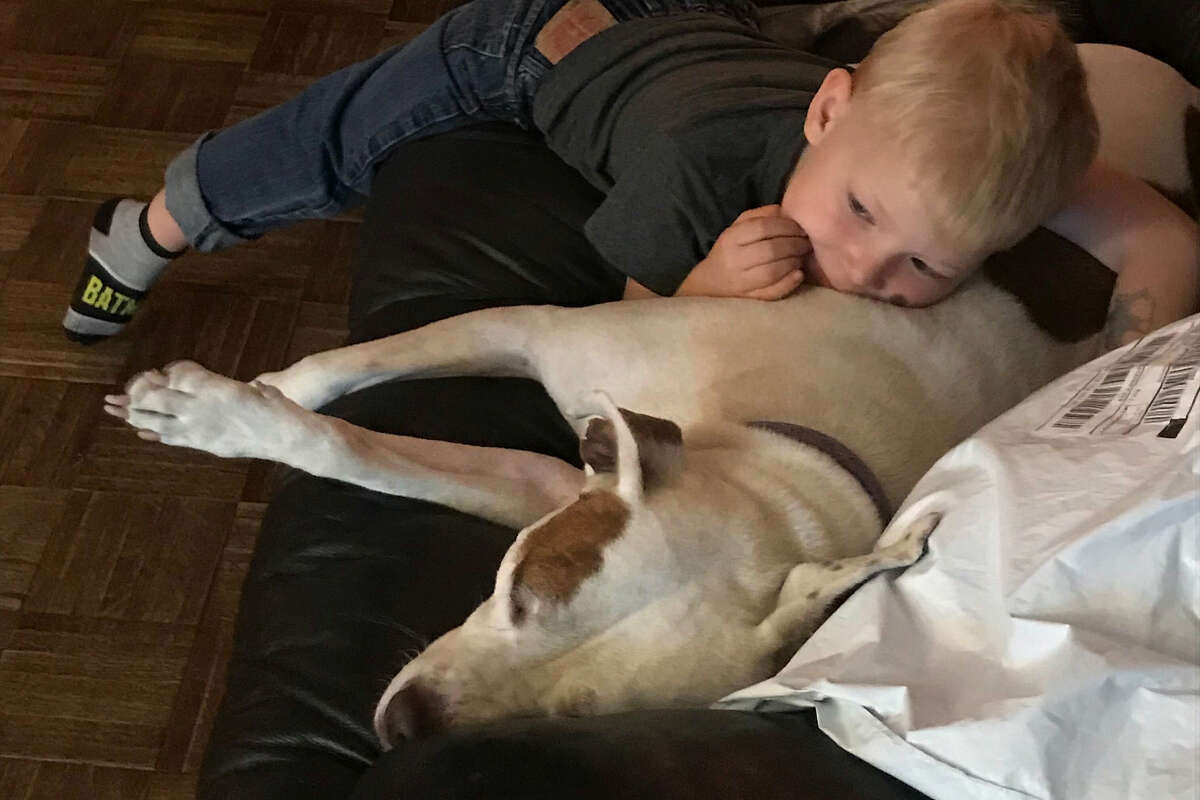 Finn entered the family shortly after Chloe did, and the two of them were inseparable, even taking naps together.

Now Chloe was back with the family, where she belonged.

“Out of this whole year, that’s been the best thing that happened,” Meade says.

We love California's parks just as much as you do, so we're launching a newsletter that covers them top to bottom — sign up here.